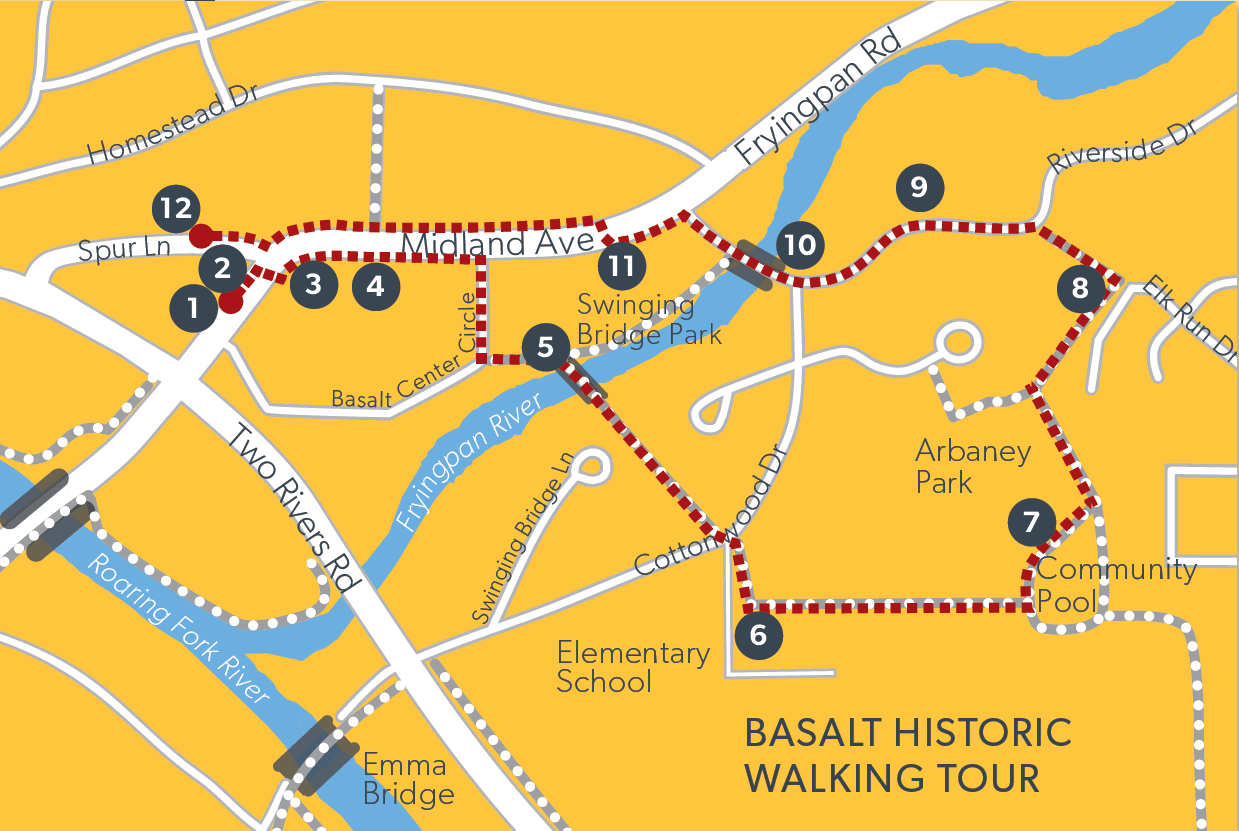 The tour starts near the Basalt Chamber of Commerce’s Red Caboose and Basalt Town Hall in Lions Park. If you are using GPS, search for 101 Midland Ave – Basalt Town Hall (https://goo.gl/maps/V1h24SUj4uJmat3T6).

Settlement of the West in the late 1800s was influenced by many factors: miners looking for precious metals; ranchers providing meat, grains, and vegetables; and the railroad, which served both. Railroads became lifelines that carried ore, supplies, and people. Built in 1882, Fryingpan was the first settlement on the south side of the Fryingpan River. It was created to house the men working the charcoal kilns that still remain today. Look for the bear paws on the sidewalks around town, pick up a map and start your tour near Town Hall and Basalt Chamber’s red caboose.

Located at 101 Midland Ave (Town Hall) | The triangle of land in the center of Basalt, where the red caboose  sits, was the original Wye, where three tracks joined, allowing trains to turn around. By 1886 Aspen Junction (present-day Basalt) began to form with a “boarding house, general store and seven saloons.” The town was a railroad camp, housing crews needed for the construction of the Colorado Midland Railroad.

Located by 101 Midland Ave, closer to Midland Spur | In 1883, the Colorado Midland Railroad (CMR) was created to run from Colorado Springs to Buena Vista. In 1885, the CMR began tunneling between towns, linking east and west Colorado. The railroad was constructed to serve the growing mining industry and to efficiently ship agricultural products.

Located in front of 137 Midland Ave (Alpine Bank) | Constructed in 1886, the railroad depot was the first passenger loading area and mail station in the central Roaring Fork Valley. Many newly arrived residents spent their first night on the benches of the depot. As the transportation hub of the valley, the depot was a source of pride and the center of the town. In 1892, fire devastated the western end of town, completely destroying the depot, which was quickly rebuilt.

Located in front of 165 Midland Ave (Tempranillo) | The Colorado Midland Hotel was constructed in 1896 to service the growing needs of Basalt. Originally owned by Dr. Thompson and Mr. Bear, the hotel had 10 sleeping rooms, a dining hall, and a saloon. Rumor has it that ladies of the night could often be seen up and down the stairs as the saloon below provided ample customers. Throughout the Quiet Years the hotel had many owners and uses, but in 1965, as the upper-valley ski areas began to generate more economic growth, the hotel was returned to a restaurant with upstairs apartments.

Stroll down Midland Ave, entering between 211-227 Midland Ave, heading beyond the parking lot towards the Frying Pan River (search Basalt Swinging Bridge) | In 1880, prior to Basalt’s formation, a one-lane, post-and-beam wooden structure was built over the Fryingpan River as a wagon bridge for horse and stage traffic passing from Aspen to Glenwood Springs. Regular wash-outs of the bridge resulted in frequent reconstruction. The town replaced it in 2001 with the existing, state-of-the-art Swinging Bridge. Still used by residents to access the school and downtown, the Swinging Bridge has become a cherished part of Basalt.

Located off of Cottonwood Drive (between Basalt Elementary and Basalt Middle Schools) | While mining and railroads provided stimulus to the Basalt economy, early ranchers and farmers were the backbone of our culture and carried the valley’s economy from the early 1900s until the ski days. Notably, the small Italian valley of Aosta, a region of northwest Italy in the Western Alps, provided a number of families that framed our future. Seeing similarities to their homeland, they recognized its potential for an agricultural lifestyle rather than the unfamiliar miners’ lives they lived in Aspen. They began to find opportunities to purchase and settle farm and ranch lands.

Located in Arbaney Park close to the Arbaney Barn | While mining and railroads provided stimulus to Basalt’s economy, the ranchers and farmers of the valley have provided the consistent backbone of our culture and economy. Arriving in the valley in 1880, settlers found rich soil and good grass. By 1881, 20 families had acquired land, intending to settle and create their lives as farmers and ranchers. More arrived through the 1880s, and soon they were running cattle and producing crops — vegetables and hay — for their own use and for the miners who began to flood the valley in their quest for minerals. Cattle production and grazing in the high country is still an important, and honored, part of Basalt’s culture.

Located off of Elk Run Drive (search Basalt Kilns) | In 1880, 900 Aspenites were employed in the silver mines. The mining produced raw ore which required initial smelting before being shipped for refinement. Demand from the Aspen smelters for refining charcoal, which burns hotter than wood, resulted in the construction of seven kilns in Basalt by the Aspen Silver Co. in 1884. The availability of fuel from the vast stands of pine and pinion trees was the main reason for the selection of this site. The kilns were constructed of unfired brick and native stone. They appear to have been constructed with an outside coating of standard mortar for protection from the elements.

Take the path from the Kilns down to Riverside Dr. Located across from 145 Riverside Drive. NOTE: This is private property – please be respectful. | In the early 1880s, the Luchsingers built a halfway house to house passengers on the stage line that traveled from Glenwood Springs to Aspen. The house was the first home constructed in the central valley and what is now Basalt. The Luchsingers probably housed some of the men who worked on the charcoal kilns. 10. The Bridges

In the 1800s, bridges were a crucial lifeline for commerce and travel, but the untamed rivers often washed them away in the spring. In 1937, the Colorado Highway Department acquired the original railroad bridge where it crossed the Fryingpan just above its junction with the Roaring Fork and converted it to a highway automobile bridge. Highway 82 became the main route for traffic up and down the valley.

Located on Riverside Drive, on the bridge over the Frying Pan River, close to Midland Ave | In the 1800s, bridges were a crucial lifeline for commerce and travel, and the untamed rivers often washed them away in the spring. In 1937, the Colorado Highway Department acquired the original railroad bridge where it crossed the Fryingpan just above its junction with the Roaring Fork and converted it to a highway automobile bridge. Highway 82 became the main route for traffic up and down the valley.

Located by 227 Midland Ave (Karen White Interiors) | By 1922, more potatoes were grown in the valley than any other crop. While cattle were a more profitable source of income, almost all locals allocated a part of their lands for potatoes. Well-drained and with adequate water for irrigation, the potato thrived and carried many a family through the Great Depression. At its peak, the Roaring Fork Valley shipped over 3.5 million pounds of potatoes to other markets each year. Although a simple crop, the potato required extensive labor and long working hours during the growing and harvesting seasons.

Located in front of 104 Midland Ave (CC Cafe) | Constructed as a residence, circa 1890, Frank Snell’s home was destroyed in the fire of 1897 that devastated the western end of Basalt. Frank, an engineer for the Colorado Midland Railroad, rebuilt his new home with brick. Little has changed today except for its use.